A Harvard man documents the Third Army’s liberation of Europe

Seventy years since Carl Henry went into training for the engagement in Europe. We follow him in his progress, starting now!

See records he signed for the morning reports of  Company A, Company B, and Company C of the 80th division, 305th Engineer Battalion to see where they were on any given day

A summary made from my dad's reports gives a timeline of dates and places from which his letter of the day was written.

Secret Third Army Operations Campaign of FranceAugust-September 1944 ; Forcing the Line of the Moselle, the capture of Metz and the Saar Campaign

(click here for a reproduction of the two above)

April 11, 1945, Ohrdruf: [See full handtyped letter, below] "In the interior of one of the barracks, on one of the straw pallets, lay a live human being, distinguishable from the dead only by the blinking of his eyes....Here we saw vast pits scooped in the earth where incompletely burned bodies were tossed and immersed in lime to complete their destruction. At the edge of the pits were vast pyre sites. Here on some railroad tracks which we saw the charred remains of a number of bodies which had been incompletely incinerated...Villagers have confessesd to our troops that for two years without interrruption the fire has been burning, so you can calculate well the number that has passed through here. Close by was a huge poker with which the firemen stirred the bodies to complete their consumption. The Frenchman told me that this was one of the more insignificant of Germany's concentration camps. He had been at Dachau and Buchenwald, where they really did things in a big way....There's all the difference in the world between seeing something like this and reading about it, and now millions of Americans will know, through these boys, that all we heard about the Nazis was not propaganda."

See photos of what Carl Henry is describing from the Eisenhower library files for April 10th and 12th at Ohrdruf: 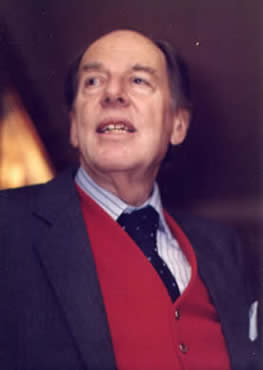 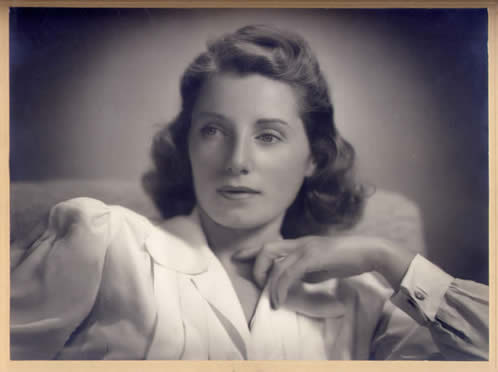 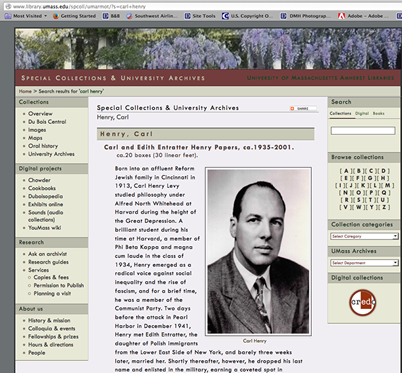 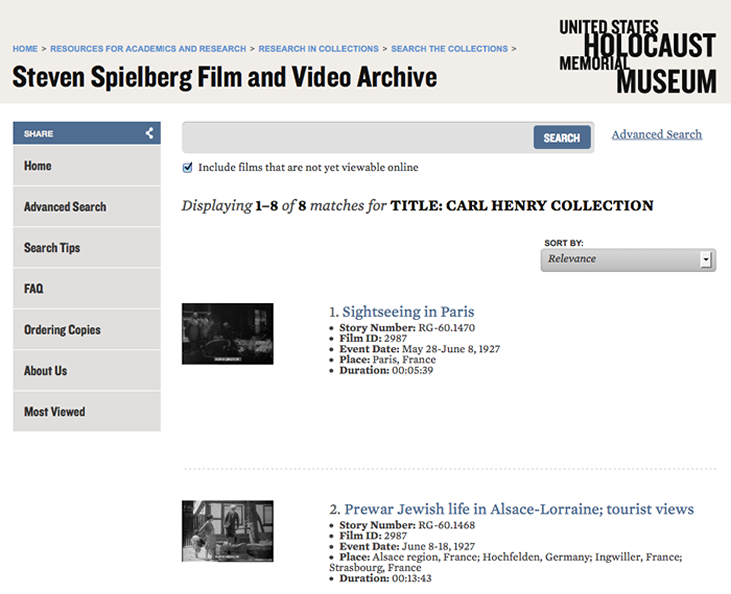 See Carl Henry Levy's childhood memories live in films he made, now at the USHMM's Steven Spielberg Film and Video Archive as well as at the Du Bois Library, U Mass, Amherst.

See Carl Henry in 1985 revisiting his father's family's Alsacian roots that he had filmed in 1927...and read their tragic and heroic story.

Carl was also fascinated and horrified by the atrocity of the execution by French fascists of his relative Georges Mandel, who was pulled out of Buchenwald concentration camp and murdered in the forest of Fontinebleau outside Paris as the Allies were moving toliberate it.

A letter from family who never made it out of Europe, asking for help to come to the USA in 1938....

And here is Carl's account of the Ingwiller synagogue as he found it during the Battle of the Bulge, and the Torah he tried to rescue.

Every day that he served overseas, for 15 months -with a very few days exception due to conditions and movements in the Battle of the Bulge- Carl Henry used the office typewriter from his desk job as Warrant Officer Junior Grade and then Chief Warrant Officer to write to his wife Edith- one, two, three or four pages a day.

She preserved the letters in books, one book for every month of his service overseas.

(Edith did not save her letters, contrary to Carl's request, when he sent them back to her.... but we do have some of her memoirs, here.)

Carl's letters are typed on onion-skin paper and with very few excisions from the censors, since he knew how to censor himself,

contain detailed, sometimes intimate, record of the experiences, sights, and feelings of a literate and affectionate man.

His somewhat obsessive personality serves to increase the detail of the description, both about war-shattered Europe and his own feelings and those of his buddies. From “Somewhere in England” to “Somewhere in Germany”, here then is Carl Henry's enthralling document of the Third Army’s liberation of Europe.

( See his service summary below)
• Served in European theater from July 1944 to September 1945, from Normandy to Luxemburg, through the Battle of the Bulge and Germany. Participated in the liberation of Ohrdruf concentration camp.(see full account below)
• After his return, founded Lucky Stride Shoes and retired in 1960. Deceased in NYC, August 24, 2001.

Read his obituary tribute for the Jewish Press by Rabbi Ephraim Z. Buchwald 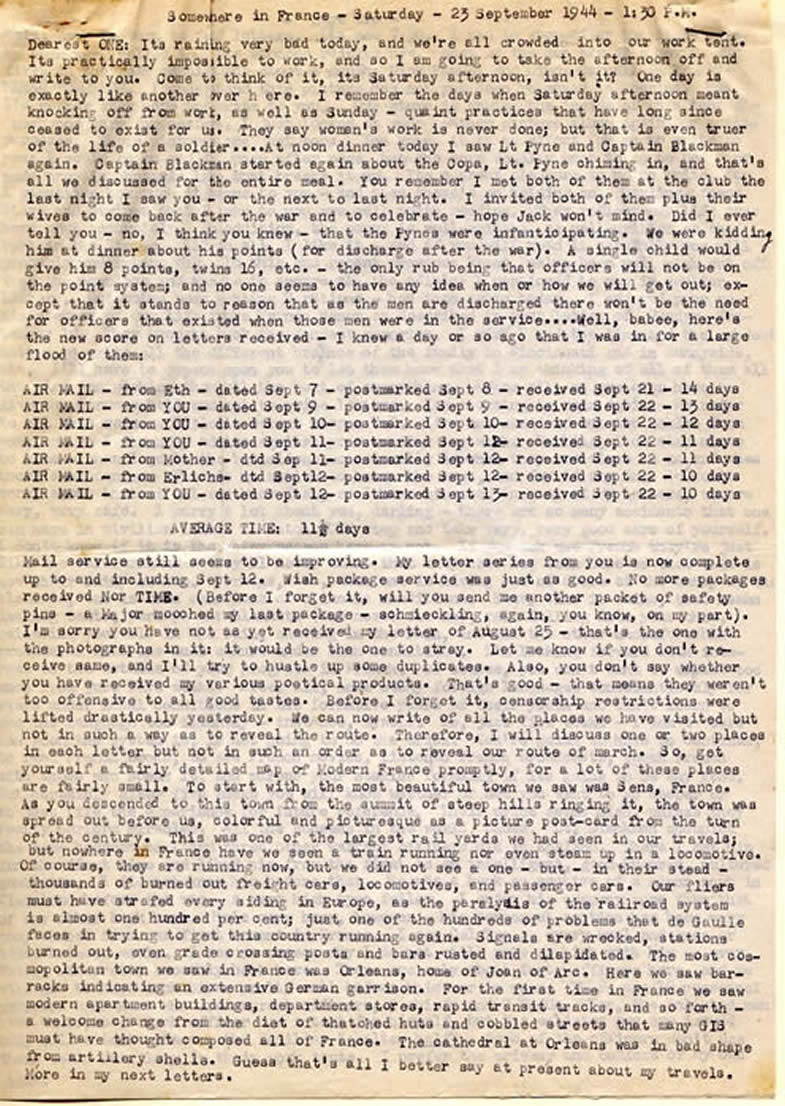 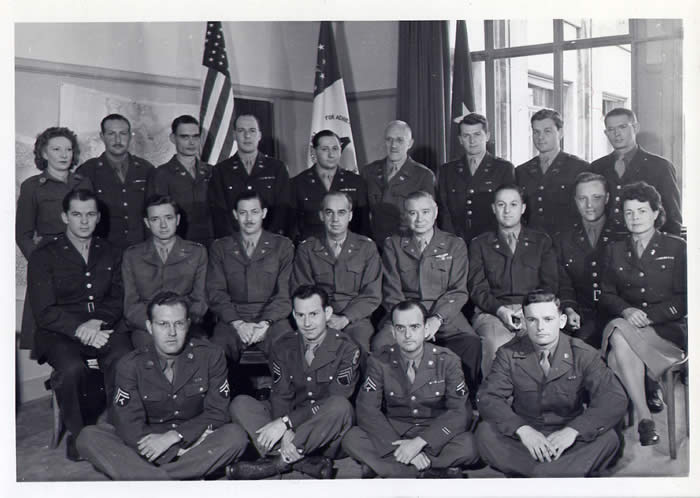 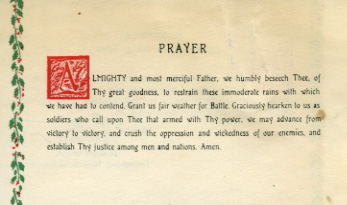 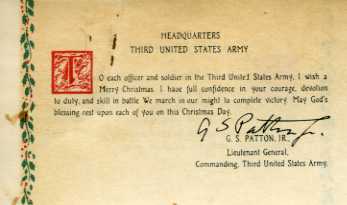 (More about the Ohrdruf concentration camp, a subcamp of Buchenwald; and the US Defense Dept film the Army took when they visited eight or so camps--this film also includes a visit to Ohrdruf : www.museumoffamilyhistory.com/cc/ccamps-us.htm

More sources for other liberator testimony:

The United States Holocaust Memorial Museum collects liberator material include written testimonies collected in the 1980's and later, oral histories (including the South Carolina ones), unit histories, published and unpublished memoirs, and personal collections from liberators that include items such as letters written home in 1945 describing what they saw. You can find the material through the Museum's Collections catalog at http://collections.ushmm.org

The Veterans' History Project at the Library of Congress
The Military History Institute at the U.S. Army Heritage and Education Center in Carlisle, PA
The National World War II Museum in New Orleans

Read Edith Henry's account of their early war years together 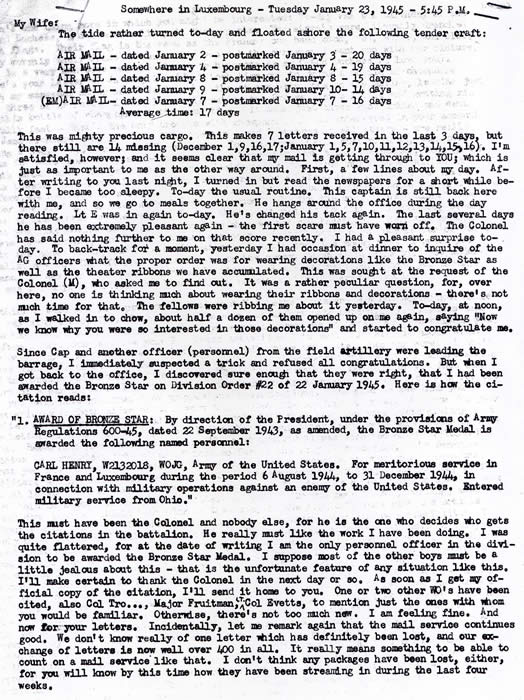 Transcription of part of  Carl Henry’s letter of 1/25/45 starting “Somewhere in Luxemburg” :

“Incidentally, regarding the Bronze Star Medal, as personnel officer I am responsible for all publicity releases to local papers on events in the battalion. Sgt. Hull typed up a publicity release on my award., but I decided not to send it forward. In the first place, there is so much jealousy in this world, especially in our ownfamily, but also outside, that I think it better not to say anything publicly about it. What is to be gained? I’m not ashamed of the award, I’m very proud, but there will be time enough after ...is over to say something about it. For the time being, I think it good polic[y]

[to] keep it under my hat. Of course, it may be of definite value in connection with the OTP, of very definite value. The way they will probably reason back in Washington is that they don’t want to bring anyone back, first, who hasn’t been overseas a fairly good length of time (I’ve got something there), who doesn’t have age ( 32 is not too bad in that connection – probably the minimum necessary), military dispensability ( apersonnel officer would seem to come under that heading), and one or two decorations to boot. This last would give me an edge over probably every other applicant in the division, which isn’t too many, I believe. Enough of that subject, except to add one last thought. My second reason for not desiring publicity is that there are too many guys who are earning their decorations the hard way, in foxholes and tanks and planes – I don’t care to share in any of their much greater glory by a little cheap newspaper publicity. “ 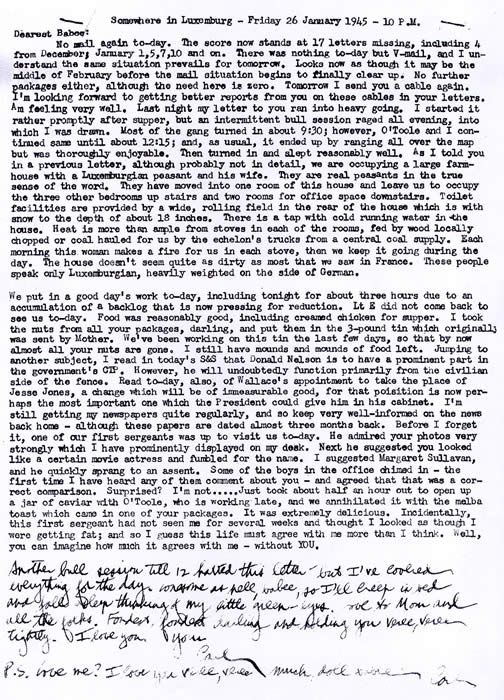 Students of history, please let us know if you want an internship! 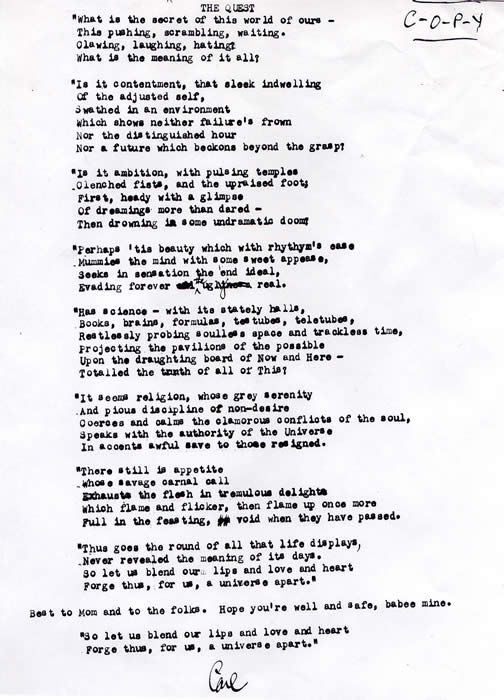 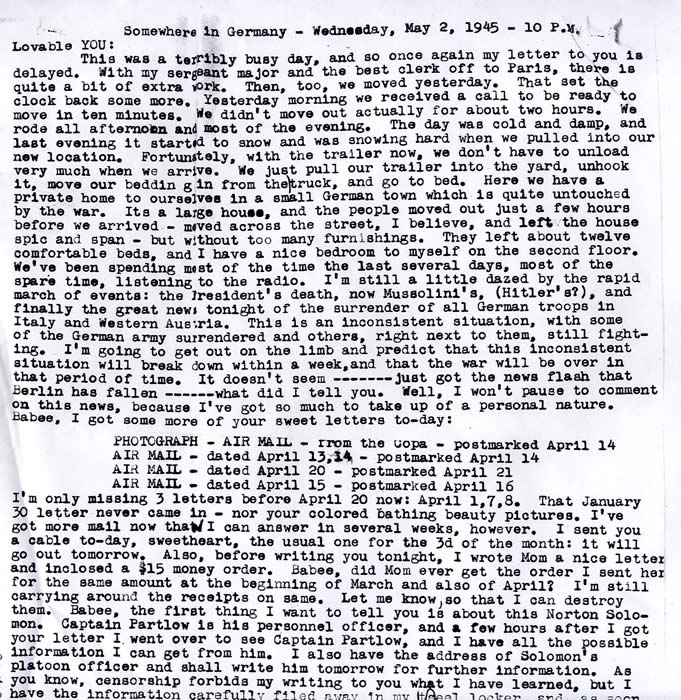 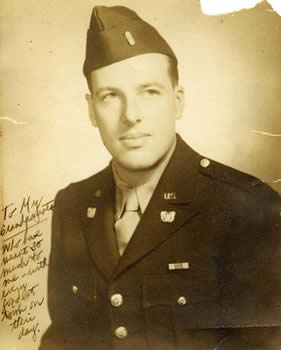 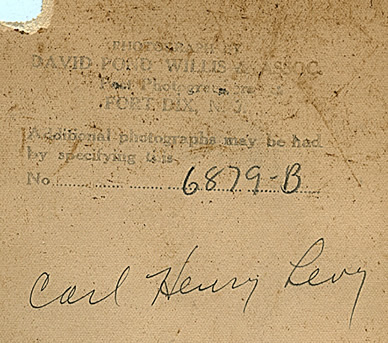 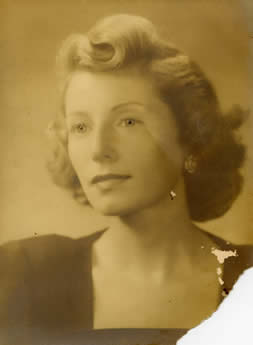 Above: Edith Entratter by Gabor Eder in portrait session before her marriage to Carl Henry Levy.

Below: "Back on the picket lines against Nazism after 50 years!" 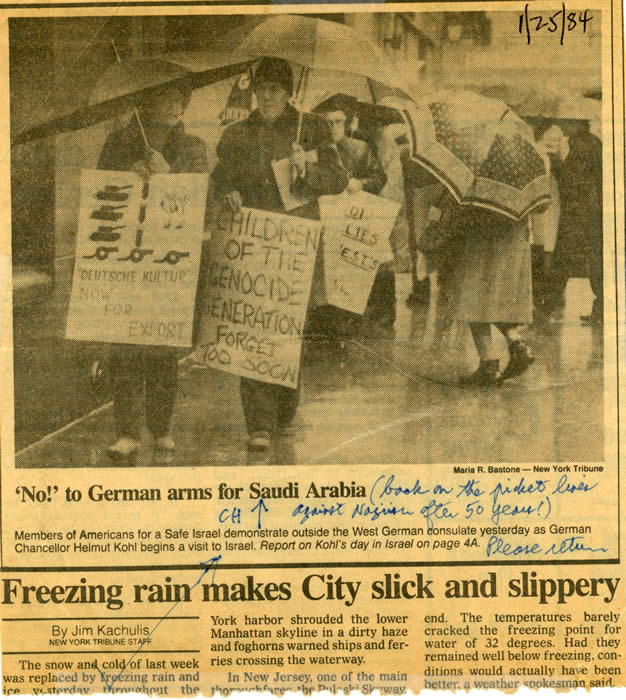 Data on Carl Henry, in his hand:

May 9, 1945: Paris, France, Office of the General Purchasing Agent: made Chief Warrant Officer.

The originals are in the Carl Henry special collection at the Du Bois Library, U Mass Amherst.

Excellent links for the War on Israel:

about the new totalitarianism and the war on Israel

And on Anti-semitism today:

And on US current events:

Shortly before his death, Dr. King had the moral courage to confront the burgeoning Jew hatred of both extreme left wing Black organizations, including the Black Panthers and the radicalized Student Non-violent Coordinating Committee, as well as the Black Muslims. For example, during a 1968 appearance at Harvard University, he stated bluntly:"When people criticize Zionists, they mean Jews, You are talking anti-Semitism."